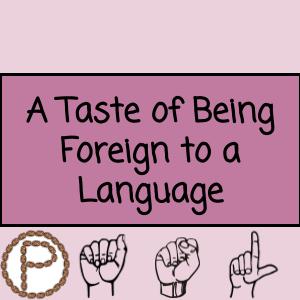 Last week my brother and I went to an American Sign Language social with other students learning ASL and people in the community.  I have no idea what came over me, but I decided to tag along. This was different for me since I am the type of person who likes to be home when I can and catch up on things. I know my brother is passionate about signing and developing an understanding of the culture, but I had never really seen him in his element. If you ever want to learn more about a person or their passions the best thing to do is be an environment where you can catch them in action. I went with the understanding that some people were hearing even though they would be signing, so I thought I would be able to participate in some form of a conversation.

A Taste of Being Foreign to a Language

My brother and I were one of the first to arrive. Others who trickled in joined my brother and me, and they began to sign. It was really neat to see my brother fluidly communicate in ASL, as if he has been signing his whole life. My brother started taking courses in high school, continued taking courses in college, and will be attending an online Master’s program. I offered a smile when my brother introduced me, but felt strange not knowing what conversations were about and not being able to contribute. I tried to read facial expressions and watch signs in hopes they would resemble gestures. In all honesty, I felt completely out of place.

Thinking of My English Language Learners

My first thoughts went to my English Language Learners and what a challenge it is to be in an environment where you are learning a new language. For my ELLs and their families who are new to the country, they have a whole other set of challenges with understanding how to “live” in a new country. As I sat there people watching and thinking of my ELLs I wondered, “How can we make school a more comfortable place for ELLs and their families?” I tweeted this question out on Twitter, and the Teacher2Teacher Twitter account re-posted it, and a number of educators responded! I was blown away by the community’s thoughtful responses. Some shared videos, pictures, and experiences of how they have made school a happy, positive, safe, and thriving environment for students. Click on the tweet below and you can see the thread to the conversation. Please share your response and keep the conversation going!

How do you make school a more comfortable place for #ELLs and their families? Reply here with ideas for T @PintoBeanz11! #ELLchat pic.twitter.com/8daMVQEIg3